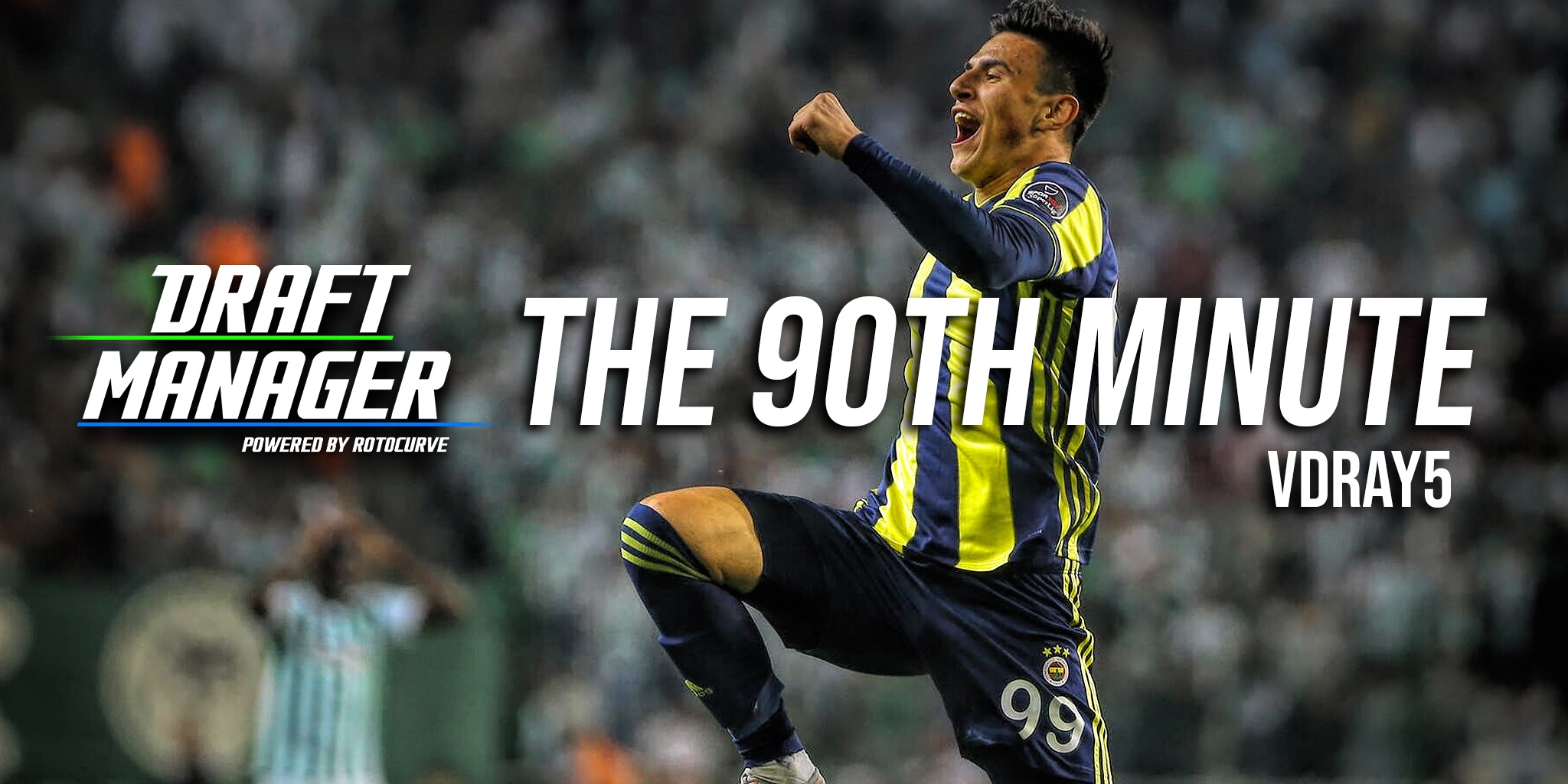 DraftKings finally gave us what we all wanted…Super Lig DFS!  After their first-ever Turkish Super Lig showdown slate on Monday, we get round two on Tuesday.  I will not claim to be some expert on fantasy soccer in Turkey, but I do think I can provide useful information for those with the desire to continue playing DFS during this COVID-19 outbreak.  Follow me on Twitter (@vdray5) for updates and last-minute advice leading up to lock on Tuesday.

I’ll likely be providing articles for both the TSL and the Russian Premier League here on Draft Manager.  This, like every decision right now, is subject to change…

However, enjoy this FREE Super Lig DFS Breakdown.  Good luck to anyone playing, and stay safe.

Goztepe (-0.5) will host Rizespor on Tuesday.  Neither team is coming into this game in good form.  Goztepe has just three wins in 2020, and they’re sliding down the Super Lig table.  However, they’re facing a Rizespor side that has just one win this calendar year.  Rizespor also has the second worst away record in the league.  Goztepe will have the upper hand in his match meaning you will want to get more Goztepe players into your lineups come Tuesday.  The two teams played to a 0-0 draw in Rize back in September, but you’d think Goztepe can win this one at home.  The goal over/under in this game is 2.5, which is a very average mark.  This won’t influence my lineup-making much, if at all.

Let’s start with the home favorite.  Their leading scorer this season Serdar Gurler suffered a leg injury and was taken off after 30 minutes last game.  It appears as though he will not be fit for this match, which puts me on Halil Akbunar more.  After Gurler, he’s second on the squad with five goals this year.  Four of those goals have come in his last nine games, so he’s in good form.  Now is a good time to mention that Rizespor concedes 2.17 goals per game on the road.  With a plus matchup for Goztepe attackers, I’ll be looking to Akbunar and Soner Aydogdu to fill the captain spots of many of my lineups.  Aydogdu leads the team in assists with six and has added in three goals of his own this season.  Cameron Jerome is also firmly in my player pool on Tuesday.  He has three goals this season and is second on the team in shots per game.

For some cheaper Goztepe exposure, I’m going to be turning to Kamil Wilczek.  He has the best anytime scoring odds in this game according to William Hill Sportsbook at +163.  He does not offer much in terms of a floor, but a possible low-owned goal can be worth the risk.  Zlatko Tripic is another way to get affordable exposure to Goztepe’s attack.  He’s going to be on set piece/corner kick duty for Goztepe, and he’ll offer a much safer floor compared to Wilczek.  If you have a little more money or want to go all in on a Goztepe stack, consider rostering Andre Castro.  He comes with a sturdy floor and goal upside at +270.

As far as playing Goztepe defenders on Tuesday, I only have a small amount of interest.  Berkan Emir would be the guy I would play, but I don’t think there’s a need to pay that kind of money for him on this slate.  I can get behind the idea of playing Titi has a value guy.  He can get you a handful of defensive stats.  Plus, a clean sheet is a definite possibility here, and those three bonus points would be big for a guy this cheap.

There’s major discussion in the DFS soccer community on whether or not you should play goalkeepers on a showdown slate.  On this slate specifically, I think there is some merit in doing so.  While Goztepe have been slipping down the table lately, they do have what it takes to keep Rizespor goal-less which would lead to a nice fantasy performance from Beto.  Rizespor is the second lowest scoring team in the league at 1.04 goals per game.  That average drops to only 0.83 goals/game away from home.  Rizespor is desperate for a good result.  Sitting in and playing defensively is no longer working for them, so they should come out running at Goztepe when they have a chance.  Beto has good upside if he can get both the win bonus and the clean sheet bonus along with a few save points.  He’s a little expensive, but he should not be high owned as many people will fade GKs.

With Rizespor’s inability to score away from home this season, fading top-tier Rizespor goal scorers (especially if you have Beto) is a viable strategy on Tuesday.  However, unless you’re playing Beto in hopes of a clean sheet, I have no problem playing a few Rizespor guys.  The two top-tier Rizespor attackers I am most interested in are Milan Skoda and Fernando Boldrin.  Skoda is more of the goal-dependent play that you need to find the back of the net.  Each player has four goals for Rizespor this year, but Skoda just joined the team in January.  Skoda’s four goals have come in his last nine games, while Boldrin’s goal tally started in August.  Skoda has better anytime scoring odds in this game (+240 to Boldrin’s +380) and averages more shots per game.  Boldrin has a safer floor with more crosses, assisted shots, and accurate passes, but he will cost significantly more on this slate.

Denys Harmash is a nice mid-range Rizespor play.  His defensive peripherals will be useful in this game, plus his scoring odds (+400) are some of the highest for players in this range.  On a slate where Goztepe attacking exposure will be popular, Harmash should fit most lineups as a one-off play.  Braian Samudio sparks my interest some as Rizespor’s preferred free kick taker.  I just don’t think I’ll be paying that for him on Tuesday.

I’m interested in Burak Albayrak for minimum price if he gets a start.  Even for as cheap as he is, Gokhan Akkan will not be in my player pool on this slate.

Thanks for checking out this free Super Lig DFS Breakdown on Draft Manager.  Good luck, and we’ll see you soon for more soccer DFS as long as leagues continue playing.