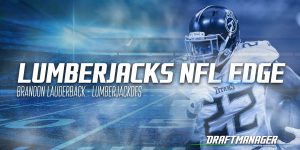 Let me begin this article by welcoming you to DraftManager! This will be our new home for anything, and everything related to Daily Fantasy Sports. The guys over at RotoCurve have provided the tools that will be backing our site, while we will be handling all of the content on a daily basis. The purpose of this article will be to give the average player an edge over the rest of the field in GPP (Guaranteed Prize Pool) contests. I will not only list my favorite plays on the day, but I will also talk some slate strategy, lineup building tips, and contest selection. These are all key concepts whenever you are building a lineup for tournaments, and can differ very much in comparison to cash games.

So, some people might be wondering, what really dictates a good GPP play? The answer is very simple. Players that have the highest projected ceiling, at lower projected ownership. Of course there are several factors that I personally use to determine players who can be good options. Projected ownership is a big part when building my tournament lineups. If a player is projected at 50%, and you do not play him, that can give you a large edge over the rest of the field. Now, I am not saying fade a 50% owned Christian McCaffrey just because he is projected at that ownership. One of the biggest keys to success in these contests is the ability to identify good, and bad chalk.

Another thing that I use to determine these plays are player price points. If a guy is priced poorly on a site, but has the potential for a big game, and is projected at lower ownership, I am going to have a good deal of interest in him. Lastly I would like to discuss one of the most underrated topics in the DFS industry, and that is contest selection.

Please do not single enter a large field GPP with 100,000 entries and get mad when you do not even double your money. Those contests are designed for players with big bankrolls, who are max entering them with 150 different lineups each and every day. We so happen to have a lineup optimizer, so if you are one of those people, more power to you. For those playing between one, and five different lineups each night, stick to the following contests:

That was probably not what you were expecting to hear, but the truth is you have a much better chance getting first place, and winning real money in those types of contests. Sure, they likely do not have the $50,000 first place prize, but they are filled with other inexperienced players, and offer long term success. If you max out those contests, with different unique lineups, stacking often, and getting exposure to low-owned players with high ceilings, I promise you the results will come. Now lets get to the plays for tonight’s slate!

For this smaller slate, instead of going by position, I am going to just talk through some plays in good spots, and mention one stack at the end.

Mitchell Trubisky – Who you play at quarterback will decide your fate on this slate. We have Brees looking for revenge after putting up a stinker against Atlanta just two games ago. Matt Ryan who burned 75% of the field last week, and then a bunch of lower owned options. I am going to have a good bit of exposure to the Bears, as they get the terrible defense that is Detroit. They give up the eighth most points against quarterbacks, ranking 14th in DVOA at the position. Trubisky, has over 40 passing attempts in his last two games, with a few decent performances, one of which came against this same Detroit team. He threw three touchdowns, and zero interceptions in that one. The performance could have been even better had he gotten some more passing yards, but with the attempts almost doubling in recent weeks, it appears Chicago is ready to air the ball out.

Josh Allen – This play depends a lot on how the game script goes, but Allen has been pretty good for the Bills. I actually think this is a spot that we could do a game stack in, at lower ownership. Josh has been finding the end-zone with ease, using his arm, and his legs. His rushing ability gives him one of the highest ceilings on the slate, and the ownership on him will be low.

John Brown – If you are playing Allen, you need to pair him with Brown who is the main receiver in Buffalo. While he has had some great games, there is always the possibility of a complete dud. Dallas is pretty strong against receivers, but Brown is getting a 26.5% target share on the year, 93% of the snaps, running 90% of the routes. The opportunity will be there for him, especially if you are thinking Buffalo plays this game from behind, which is my thought process.

Russell Gage – While I really like Anthony Miller today, he is looking pretty chalky as of right now, so lets talk about Gage for a minute. If Julio was to sit today, Gage moves into must-play territory for me, and likely becomes chalk. If Jones plays, Gage remains a GPP pivot, and remains at lower ownership. Either way, the Saints give up the 12th most points against receivers, and Gage saw a season high 82% of the snaps last week. It appears as thought Atlanta is putting more faith in their young prospect, and as a result, he caught eight of ten passes, for 76 yards. I watched a lot of that game, and liked the effort out of Russell, laying out for bad passes, and making some crucial late game plays, on fourth down. With limited value on FanDuel today, this is a play I have no problem with.

David Montgomery – There is one reason, and one reason only that I prefer Montgomery over Cohen. I think that Chicago will be leading this game, by a large margin. This virtually eliminates Tarik from the game script, as he is primarily used as a receiver. Yes, Cohen has been the better running back overall, but David is still getting more snaps, and a larger chunk of the carries. Detroit also ranks 20th in DVOA against the rush, giving up the second most points against running backs this season. With the game script in his favor, in a good spot, Montgomery is my preferred Chicago back.

Latavius Murray – The reality of this situation in New Orleans has become more clear after last week. First, Kamara is simply not as good as we all thought he was. Second, Murray is the short distance rusher, and goal-line back for the foreseeable future. Atlanta has been stingy against running backs, but not as good against pass catching backs. This is why most people will gravitate towards Kamara. Murray is not getting nearly as many snaps as Alvin, but he has plenty of touchdown upside in a game where there should be plenty.

Buffalo/Dallas – No matter how bad the Cowboys have looked over the recent seasons, they come to play on Thanksgiving day. Elliott will be highly owned, and is good chalk against a team that is not good against running backs. Dak will go overlooked, and he has been great all season long. Lastly, Michael Gallup has some big boom-or-bust production, but gets a much better individual match-up compared to Cooper. From the Bills, keep it simple, and target Allen, Brown, and Singletary.

Thanks for reading everyone, and if you liked what you saw today, click the image below and try out our NFL monthly subscription for only $10.