Welcome back to Inside the Pylon – the DraftKings NFL DFS breakdown brought to you by Draft Manager!

Have you tried out our premium content yet? If not, click on the graphic below to become a part of the fastest-growing community in the industry for as low as $5 per month! With our all-inclusive package at only $25 per month, we help you become better DFS players in every facet, so click below and join today! 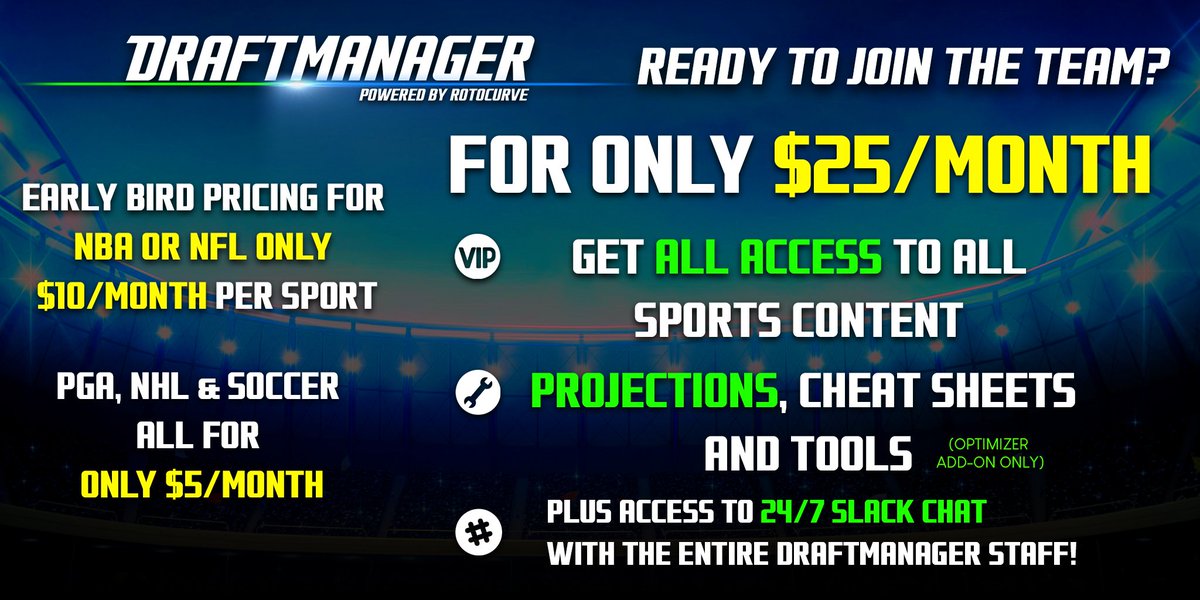 Week 13 is a bit different, as I will have TWO articles for DraftKings, covering both today’s 3-game Thanksgiving slate, as well as the Sunday main slate (published on Saturday). It’s an all-day slate today, as the three games stretch from 12:30pm ET to 8:20pm ET, listed below:

After a down game in Week 10 (against the same Falcons), Brees has picked up right where he left off over weeks 11 and 12, accumulating 539 yards and 6 passing touchdowns while averaging 37 passing attempts. The Falcons defense ranks 29th in pass DVOA and have given up the 6th most passing yards per game (266.4) and the 5th most passing TDs (22). They picked up a season-high 6 sacks against Brees in Week 10, but I see no way that they repeat the performance considering the fact that they’ve failed to record a sack in 6 games this season, making Brees an elite spend-up option.

While the Bills rank top-5 in the NFL in pass DVOA, it’s hard to not love the price on Prescott this afternoon. Despite posting 22+ dkp in 3 of his last 4 outings, his latest dud had the DK algorithm price him all the way down to $5,700. Looking at the Bills schedule thus far, they’ve really only faced 2 above-average passing attacks (PHI and NE), allowing 23 points per game in those two outings. On top of that, Prescott has logged 3 TD passes in 3 of his last 4 outings while amassing an average of 327.5 yards per game. You won’t find upside like this for such a cheap price anywhere else on the slate.

Despite a dud last week, Kamara still received 20 touches in the game (11 carries, 9 receptions). He’s now recorded 27 catches over his last three games while holding 18.25% of the target share on the season. He hasn’t found pay-dirt since Week 3 and given the fact that he scored 18 total touchdowns last season, I have a hard time believing that his current pace will continue. With no other high-priced RBs to consider today, he’s chalk that is well worth eating in a game with the highest over/under on the slate (49.0).

Underpriced is an understatement for Zeke tonight. While his lack of consistency has been frustrating, he’s cleared 20 touches in all but 3 games this season, logging 22+ in 3 of his last 4 games. As a 6.5-point favorite at home, there is a good chance that Elliott sees a large amount of positive game script, which bodes well for him in a matchup with a Bills defense that ranks 26th in rush DVOA.

With Taylor Gabriel out, there’s now an extra 13.25% of the target share to go around in Chicago and with most of his damage being done in short-yardage situations, Cohen seems like a good bet to soak those targets up. As a running back, he already holds a 19.48% share of the targets (2nd on team) and has seen a slight uptick in rushing attempts, with 15 total over the last two weeks. On DraftKings, where receptions are weighted heavily, he comes with a high floor against a soft defense for a cheap price.

There isn’t a ton of analysis that has to be done here. He’s logged 10+ targets in every week since week 4 and hasn’t dipped below 25 dkp in a game since week 6. The Falcons rank 29th in pass DVOA and in his last matchup with them (week 10), he posted a 13-152-0 line on 14 targets. He may be the highest owned player on the slate and for good reason.

With Julio Jones ailing and Austin Hooper already ruled out, Calvin Ridley should draw another massive workload today. As long as Jones plays, Ridley should effectively avoid Marshon Lattimore, who’s expected to play. With his expanded role since Hooper went down, Ridley has logged 22 targets over his last two games, posting lines of 8-143-1 and 6-85-1. He should continue to see a bump to his 19.95% target share, making him the top mid-tier receiver on the slate.

With Amari Cooper being shadowed by Tre White, Gallup should line up opposite of Levi Wallace, who’s taken a massive step backward this season, as he’s posted a PFF grade of 60.6 after posting a grade of 83.5 last season. Over his last 4 games, he’s logged 35 targets, while averaging 4.75 catches for 77.25 yards with 2 scores in that span. At $5,500 in a game where he should see a bump on his 18.56% target share, he comes in a touch too cheap today.

As mentioned previously, Taylor Gabriel being out opens up an additional 13.25% of the targets in Chicago, so who’s a better bet to see the expanded role than the receiver who’s drawn 20 targets over his past two games? Miller has converted those targets into 12 catches for 131 total yards and while he lacks the touchdown upside that you’d like in this Bears offense, his $3,900 price is far too cheap against a Lions defense that ranks 24th in pass DVOA.

Cook has quietly established himself as one of the safest tight ends in the league, but has yet to be priced up to that status. He hasn’t seen less than 11 dkp since week 5 and he’s fresh off of his best game of the season, amassing a 6-99-1 line against the Panthers. While the Falcons are a rather middle-of-the-pack team against TEs, he offers too much security at a thin position to pass up on a 3-game slate.

When I said this was a thin position, I meant it. For $2,900 though, you could argue that Knox checks in as a strong value play. He’s recorded multiple catches in 5 of his last 6 games and given the fact that DraftKings awards a point per reception, getting anywhere from 3-4 dkp as a floor is something you’ll live with. The Bills should be playing from behind in this game, meaning Allen should be airing it out more than usual, which could heighten the upside for Knox.