Inside the Pylon: DraftKings NFL Breakdown – Divisional Round 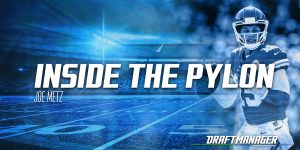 Welcome back to Inside the Pylon – the DraftKings NFL DFS breakdown brought to you by Draft Manager!

We return to another NFL playoff slate that encompasses the entire weekend, with two games on Saturday and the other two on Sunday. Below is the schedule for the Divisional round with each game’s respective Vegas odds.

As a reminder, the players that I write up are not an end-all-be-all. While they are a core group I will be focusing on, the “also consider” sections round out my player pool and any of them could be included in lineups with confidence.

On top of that, we are also running an early-bird promotion for our rest-of-season NBA package. You can get ALL content and tools for only $34 for the rest of the NBA regular season. If you want to add in our top-of-the-line optimizer, you would only have to pay an additional $43 for a total of $77. That comes out to less than $30 per month for EVERYTHING. Click below to check it out! 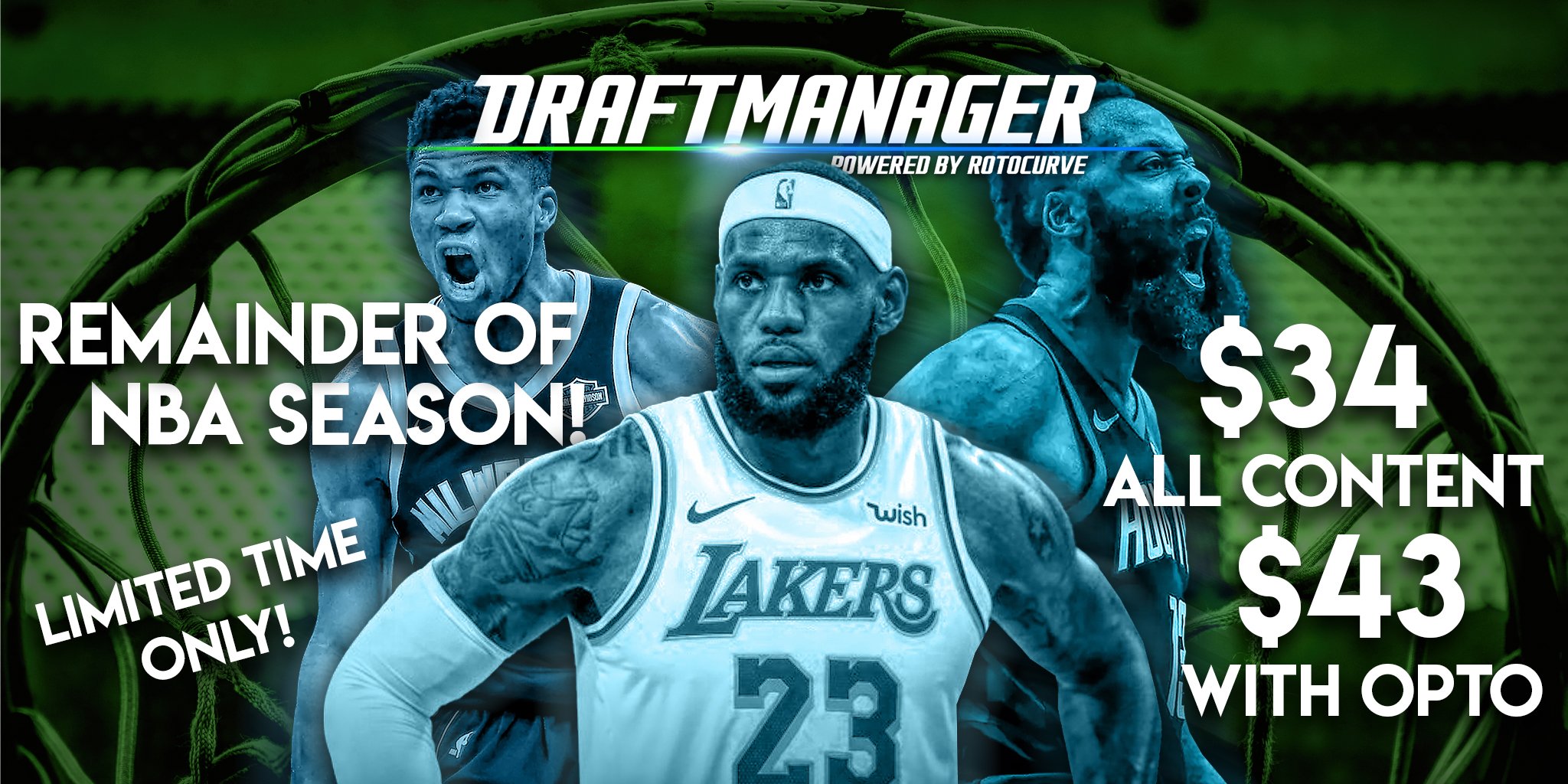 While Lamar Jackson may have the highest ceiling, building a lineup that you are comfortable with is near impossible with his price tag. Thankfully, we have a similar ceiling for almost $1,000 less. The Chiefs check in with the highest implied total on the slate in a game with the highest over/under, as Mahomes gets to take on a Houston secondary that ranks 26th in the NFL in pass DVOA.

Houston’s defense has only gotten worse as the season progressed, as they finished the season allowing the 4th most passing yards per game (367.2), the 4th most passing touchdowns (33) and the 8th most completions of 20+ yards (58). Mahomes topped 250 yards and 3 touchdowns in their first matchup (Week 6) and while the return of JJ Watt could increase the pressure from the defensive line, everything lines up for Mahomes to have his way with this defense this weekend.

If you want to save a few bucks at the position, Watson feels like the best bet to do that given his floor/ceiling combination. He gives you exposure to the highest total on the slate (51.5) and should be playing from behind for the majority of the game, creating a ton of positive game script.

Last week against the Bills, Watson played hero-ball, throwing for 247 yards and a touchdown, while also rushing 14 times for 55 yards and another score. He exploded against these same Chiefs in Week 6 for 280 yards and a touchdown, with 42 rushing yards and another pair of touchdowns on the ground. The Chiefs have one of the better secondaries in the NFL (6th in pass DVOA), but the sheer volume in this matchup should be what’s appealing, as he tossed 42 attempts in Week 6. If the Texans have any hope this weekend, Watson is going to need a monster game through both the air and ground.

The projected game-script isn’t ideal from a running back perspective and even though the 49ers rank in the top half of the league in rush DVOA (11th), Cook should be a staple in your cash game lineups. He leads the slate in opportunities and saw another 33 last week against a stout Saints defense (28 carries, 5 targets).

On top of the sheer volume, he carries elite red-zone usage, as he ranked 5th overall in the NFL in red-zone carries (46), commanding 51.1% of those carries for the Vikings. Much like Watson and the Texans, the Vikings could be playing from behind here, but if they want a shot at winning, you can expect Dalvin Cook to touch the ball early and often.

Arguably the top overall running back on the slate from a point-per-dollar standpoint, Williams should be one of the highest-owned players of the entire weekend. He closed out the regular season as the feature back in KC, averaging 14 carries for 94.5 yards while adding 3.5 receptions for 28.5 yards over the final two weeks of the season. He added 3 total touchdowns to those numbers as well and ripped off some massive plays, highlighted by a 91-yard TD run in Week 17.

With Williams garnering the lion’s share of the ownership at this price point, I fully expect Mostert to go overlooked, but that makes him one of my favorite tournament options on the slate.

Since taking over the lead back role in week 13, Mostert topped 30 DraftKings points in 3 of 5 games while notching 7 total touchdowns. He saw at least 11 touches in every game across those weeks and should see a similar workload this weekend. While the Vikings rank 9th in overall rush DVOA, the positive game script and involvement in the passing game should create more than enough opportunity for Mostert to not only pay off his salary, but potentially smash at low ownership.

It took him a while to get going this season, but Adams remains one of the best WRs in football and the top overall target at the position this weekend. He closed out the regular season three straight games over 22 DraftKings points. Over that span, he saw 42 total targets and racked up 312 total yards. The Seahawks secondary is a rather middling unit, as they rank 15th in pass DVOA, but Adams’ individual matchup is what’s enticing.

With Shaquill Griffin projected to cover Lazard on the right side of the field, Adams should line up opposite of Tre Flowers, who ranks 105th among qualified corners with a 52.6 player grade (11.5 points lower than last season). If you can afford Adams, there’s no reason not to lock him in.

His inconsistency can be infuriating, but Lockett’s ceiling is through the roof for his price tag this weekend. He’s seen at least 7 targets in 4 straight games and has also scored twice in that span. Last week against the Eagles, he logged a 4-62-0 line on 8 targets and while that line was disappointing, the game was a snoozefest overall.

The Packers defense ranks 10th overall in pass DVOA and did a fine job limiting production out of the slot this season, but they haven’t seen a slot receiver of Lockett’s caliber this season. The closest you could argue is Adam Thielen, who logged 5 catches for 75 yards on 8 targets in Week 2. Given the magnitude and the tight spread in this game, expect Lockett to be heavily involved for a rather reasonable price tag as the Packers try and limit the deep ball with Metcalf.

This price tag is the biggest question mark on the slate. Samuel posted at least 13 DraftKings points in 7 of his last 8 games and most recently logged a 5-102-0 line against the Seahawks in Week 17. On top of that, he now gets to face a depleted Vikings secondary that has ruled Mackensie Alexander and Jayron Kearse out for the game. This bodes well for Samuel, who gets the most enticing matchup out of the bunch in Xavier Rhodes. Rhodes allowed a catch rate of over 84% in the regular season and is posting his lowest PFF grade (48.4) of his 7-year career, ranking him 113th out of qualified cornerbacks. Samuel seems like one of the safest overall plays on the board this week.

Dropping down to the $4k range, most will look to Marquise Brown for salary relief, but I would argue that Lazard is by far the safer option. He came around as the WR2 for the Packers by season’s end and should maintain the same role this weekend. Since the Packers week 11 bye, Lazard has posted at least 9 DraftKings points in 3 of 6 games with 3+ targets in all but 1 of those games.

Comparatively, Brown has only logged 3 or more targets in 3 of those 6 weeks. He also finished the season on a high note, logging 17 total targets over the last two weeks, amassing 114 total yards and a touchdown on 9 total receptions. Given the recent form, he’s far too cheap on a short slate for his potential ceiling this weekend.

I wanted to write up Kelce, but given the fact that he plays on Sunday and still carries a questionable tag, I wouldn’t feel 100% confident recommending him. This defaults Kittle as the top option for $200 less. He led the 49ers in target share this season (22.74%) and that jump to 26.03% in the red zone. While the Vikings have been one of the best teams in the NFL in containing opposing TEs, Kittle had a career year while posting a player grade of 95 (!!), proving the point that he is just about matchup proof. He hasn’t dipped below 16 DraftKings points since Week 13 and has only dipped below 10 DraftKings points 3 times on the entire season. He’s as safe as they come at a thin position.

Fells is currently questionable with a hip injury but based on how the Texans handle their injury reports, I fully expect him to suit up. Without Jordan Akins in the fold last week, Fells logged 96% of the offensive snaps and posted a 4-37-0 line on 5 targets. While that won’t jump off of the page, that’s more than reasonable for his sub-$4k price. In his last meeting with the Chiefs in Week 6, he posted a 6-69-0 line on 7 targets and could be in line for another significant workload this weekend. If he ends up playing and Akins sits, he should once again see an elite snap count and given the projected game script, could be the recipient of another 5-7 targets.

Thank you for reading my DraftKings NFL DFS breakdown for the Wildcard Weekend slate! For more, follow me on Twitter at @JMetz34 and check out the tools at Draft Manager!