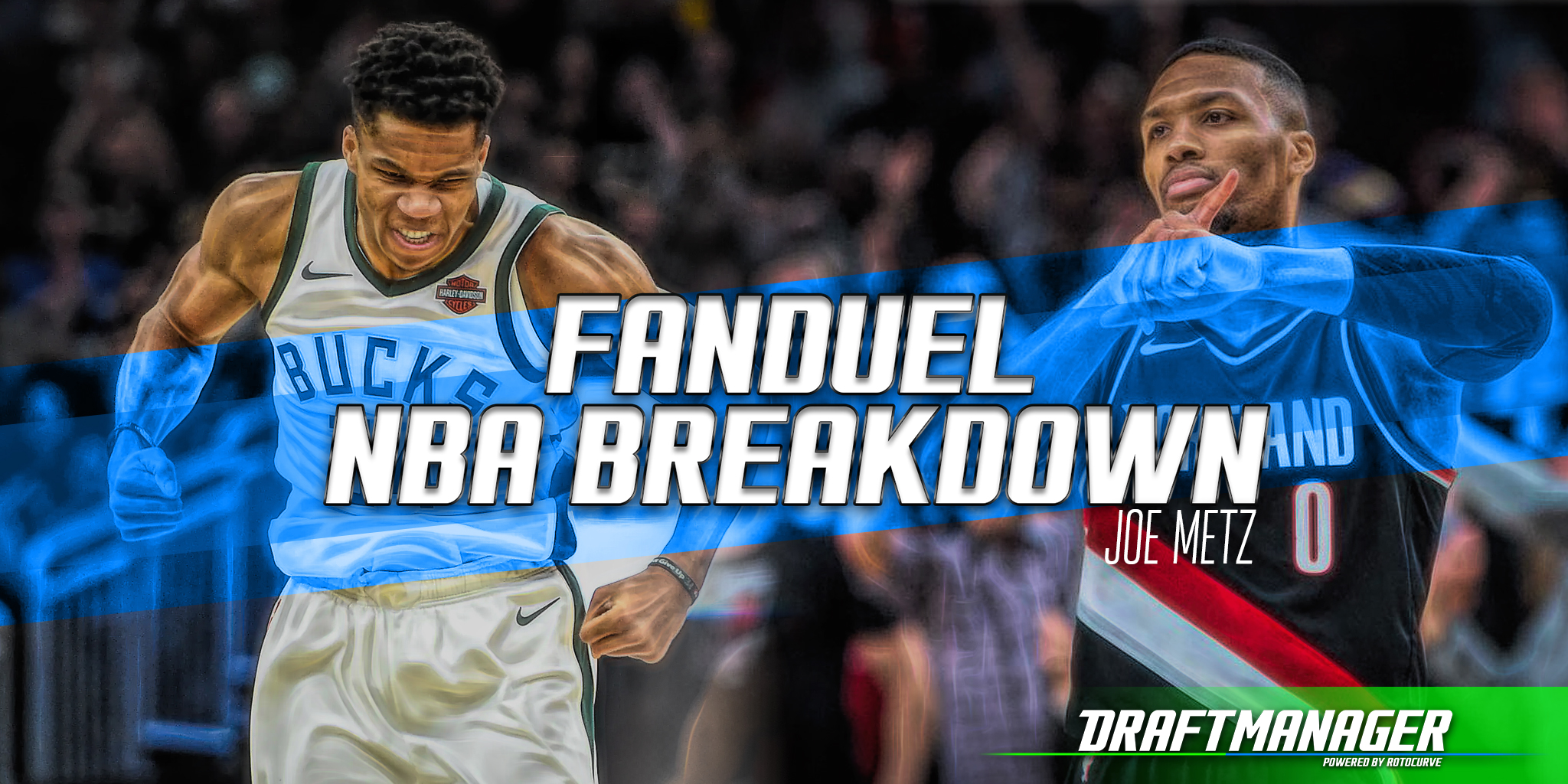 Welcome to my FanDuel NBA DFS breakdown, where you will get an all-encompassing breakdown for the main slate on Wednesday, March 11th.

Back to reality as I came home from my 4-day trip to Southern California late Monday night and spent Tuesday trying to crawl my way out of 250+ emails at work. Now that I have time to get back to DFS, I can’t wait to dive right back into the association.

As for the slate today, we have 6 games on tap with only a few stars up top. Below are the games on the docket:

As a reminder, my FanDuel NBA breakdowns are an all-encompassing article. I will go over the best way to attack the particular slate (slate strategy), my core four, my rankings of the stud plays as well as my rankings of the value plays and I will round it out with some quick hitters for GPP pivots.

The below content is for premium members only. Interested in signing up and reading on? Click here to join the fastest growing community in the industry for as little as $5!

The entire slate hinges on the availability of Joel Embiid. Given the fact that he’s missed the last 5 games and has steadily ramped up his activity, it would make sense that his return is around the corner. Priced at only $9,000 on FanDuel today, it would be hard to not lock him in should he be active. With that said, I think it’s safer to err on the side of caution given the fact that the 76ers don’t necessarily need him to beat the Pistons.

Aside from Embiid, Jimmy Butler is the only other high-usage player with a questionable tag. Should he sit, we should see a massive peripheral boost to Bam Adebayo and increased volume for Duncan Robinson, Kendrick Nunn, and Goran Dragic.

With only two players over $10,000 on the slate, balanced builds are going to be easier to achieve, making me lean towards a 1-stud approach (between Doncic and Young) and surrounding them with another high-tier player, and some mid-tier value.

Even with Doncic on the slate with Porzingis listed as doubtful, it’s almost impossible to get away from Young tonight. His rates this season are video-game-like, as he boasts a 34.8% usage rate, 42.1% assist rate and produces 1.34 fdp/m. On top of that, he ranks 7th in the NBA in touches per game (86.8) and leads the NBA in time of possession per game (9.1 minutes). In his two meetings with the Knicks this season, Young is averaging 44.5 points, 10.5 assists and 1 steal per game, giving him arguably the highest floor/ceiling combination on the entire slate.

The Sixers continue to run a short-handed rotation and given reports that Joel Embiid will be handled with caution approaching the playoffs, I would expect him to sit. This would leave Tobias Harris with the lion’s share of usage. With Embiid and Simmons out this season, Harris leads the team with a 27.5% usage rate, while also seeing respectable peripheral boosts, posting a 15.8% assist rate and 13.6% rebounding rate. He’s topped 20 raw points in 4 of his last 5 games and has only dipped below 35 FDP once in that span, making him one of the safest cash-game plays on the board, especially at a thin position.

The Knicks are looking like popular cash games options and it’s terrifying, but there’s actually some value to be had. While his efficiency still leaves a lot to be desired, RJ Barrett has picked up his performances over the past month since the All-Star break and still comes in below $5,000. At his current salary, he’s topped 5x value in 7 out of his last 9 games while logging at least 29 minutes in 7 as well. He still maintains a respectable 23.9% usage rate and is attempting over 10 shots per game, so if his shots start falling, his production is only going to get better. The Hawks present an up-tempo matchup for a guard that can collect peripherals like they’re baseball cards, giving him a ton of upside for a cheap price.

With Porzingis officially ruled out, we should once again see Kleber step into the starting role and command a large amount of production. He’s seen 30+ minutes in four of his last five games, topping 21 FDP in 4 of the 5 while going for 34+ in 2 of those said 4. This is a play that comes with legitimate 10x upside and one that should be fairly popular, so it is chalk that is more than worth eating in cash games.

*My top value plays listed in the order of preference and based on the point-per-dollar value that they present at their respective positions.

With both Joel Embiid and Rudy Gobert’s status for tonight up in the air, the center position remains one of the more lucrative positions on the slate tonight. Mitchell Robinson seems to finally be getting playing time and priced below $6,000, he makes for an elite tournament play in a juicy matchup with the Hawks. Cody Zeller and Bismack Biyombo are two other value options at the position. Regardless of who starts, there’s value to be had in two players priced at $4,300 or lower seeing 25+ minutes per game at a thin position.

Just about the entire Heat roster is banged up, making Bam Adebayo an elite option in the $8k range. He has legitimate triple-double upside and should see a massive boost in peripherals should Jimmy Butler sit. It may be a popular strategy to pay up for one PF spot and down for the other and if that’s the case, make sure Bam is your spend-up.

Lonzo Ball may go overlooked with the masses flocking to Doncic and Young, but his production has been off the charts. He’s topped 35 FanDuel points in 6 straight games, while 3 of those have gone over 50. He finds himself in an up-tempo matchup at a reasonable price, making him an elite pivot off of the top-tier studs.

Thank you for reading my FanDuel NBA Breakdown for March 11th! If you have questions, reach out to me on Twitter at @JMetz34 and make sure to follow @Draft_Manager for all of your NBA DFS content and tools!