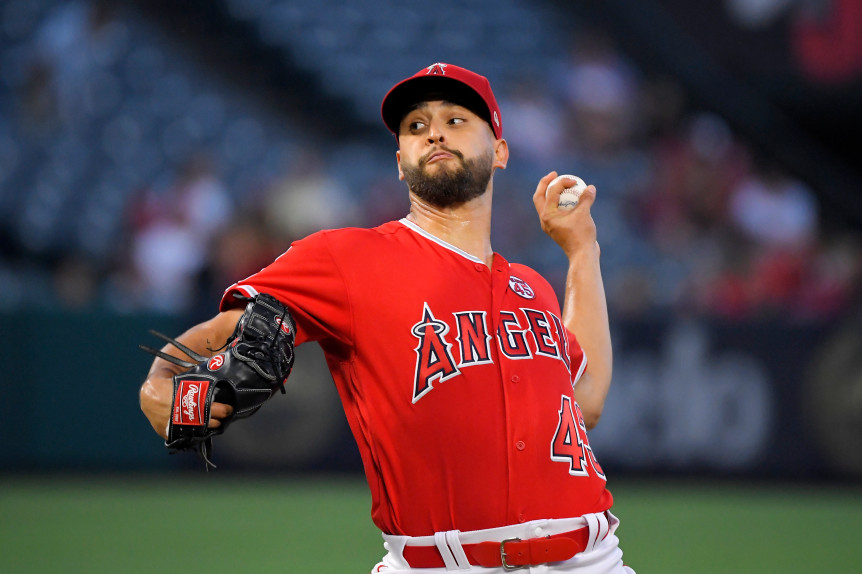 While we’re all quarantined in a hellish scenario, without sports, FanDuel MLB is still able to generate simulated gaming options, via numberFire, and provides FREE lineup options for each simulation.

Winning may not help you in the short-term, but this allows us to build our purse for big players when we’re back to live FanDuel MLB. This is becoming a popular option for those of us desperate and hungry for sports. Even betting lines are set for simulated Madden games right now. Crazy times my DFS MLB loving friends!

The Early slate provides 12 starting pitching options from 12 teams over six games, between 2:20 PM and 3:10 PM ET. Here’s a look at the pitching match-ups:

The top two pitchers in this slate are clearly Castillo and Martinez. Of all starting pitchers in the early slate, Castillo has the highest K-rate over the last season, at 28.9%, and his 3.48 xFIP is the best of this group.

But, while Castillo is pitching at home, which should give him a slight advantage, the Reds are hosting a good Phillies offense, in a hitters park. That said, the Phils did struggle against right-handed pitching away from Citizens Bank park last season, a low 81 wRC+ (fourth worst in baseball) indicates that Castillo could still be a great play here.

But, that’s a Phillies team that was decimated with injuries, which isn’t going to factor as much into this simulation. So, Castillo is still worth the high-salary play.

Carlos Martinez appears to be a solid play as well, just a tick below Castillo and both xFIP and K-rate. But, Martinez has a worse match-up. Against RHP’s in Wrigley Field last year, the Cubs had a 109 wRC+, tied with the Braves for sixth best in baseball. So, between Martinez and Castillo, I’m leaning heavily toward Luis, as Carlos likely isn’t worth the salary in this slate (feels good to say but this is still weird man).

But, my favorite starting pitching play of this slate is also a great FanDuel MLB value play. Yes, there’s a ton of risk too!

Patrick Sandoval ($7,600) didn’t see many long outings as he was beginning to make a case for a back-end rotation position for the Halos, in 2019. However, this is a new season. And, the simulation likely expects Sandoval to at least hit five innings against a suspect Tigers squad against lefty pitching.

With an 88 wRC+ against lefties in Detroit last year, the Tigers had one of the worst offenses in baseball with this setup. The simulation likely will yield a very good point-per-DFS-dollar result in FanDuel MLB lineups this afternoon.

I’d go with Castillo or Sandoval, but Sandoval’s value is undeniable. And, when you’re considering risk…remember, this is a FREE PLAY!

The ‘Main’ Sim slate provides 18 starting pitching options from 18 teams over nine games, between 7:10 PM and 8:30 PM ET. Here’s a look at the pitching match-ups:

As you can see by my highlights, I love four pitchers in this slate. I’ve highlighted these four in the chart below, data I pulled from fangraphs.com from the 2019 season. I narrowed down my search to a low xFIP and looked at high K-rates. Fortunately, the two matched well, to generate my top four (that doesn’t always happen as easily).

Among the other three options, Lance Lynn is again a better option, although the match-up against the Astros doesn’t look ideal. In Lynn’s last five starts against the Astros, he has given up three to four runs in many of the games, but over at least seven innings.

And, Lynn averaged 9.6 K’s per game in that time, even greater than Corbin’s average against the Dodgers. So, you could argue Lance is a better FanDuel MLB Sim SP in this slate, than Patrick. And, he happens to be significantly cheaper.

Gallen ironically looks like the best match-up starter, but has a high walk rate, and is likely chalky in this slate. I’d rather pay up for Corbin or get significantly better value from Lynn, than pay such a risky premium for Gallen.

Finally, Richards is a solid play, at home in San Diego against a struggling Giants offense. That said, Richards is a decent value play, if you’re not sold on Lynn. But, all things considered, Lynn should be the best simulated starting pitcher in this FanDuel MLB slate.

Well, that’s all I have for you to consider for starting pitchers in the Early Only and ‘Main’ Simulation slates for FanDuel MLB on Friday, April 10th. I hope this helps you focus on something other than teaching your kids, a pandemic, netflix, or whatever other thing is driving you nuts. If you’re like me…you’re DYING for any live sporting action I can get, even if simulated!